The pancreas is the ‘sweetbread’ organ at the back of the abdomen.  It is a flat glandular organ.  It has a hormonal (endocrine) component that makes insulin and some other hormones.  It also has an exocrine function that produces digestive juices that assist in the breakdown of starch, proteins and fat.  These juices are excreted through a duct into the duodenum (the first part of the small intestine) where they mix with the food we eat.  The bile duct (bringing bile into the gut from the liver) passes through the pancreas on its’ way to the duodenum.

Tumours of the pancreas can be solid or cystic and can arise from the exocrine gland cells or the endocrine gland cells.  They can be benign or malignant.  Rarely the pancreas is a site for secondaries from cancers elsewhere (particularly melanoma).  Most cysts in the pancreas are benign and can be safely watched.  Most solid lumps should be removed because of the risk for cancer.

The most common cancer of the pancreas is ‘ductal adenocarcinoma’ This is an aggressive tumour with poor outcomes unless it can be completely removed.  Adenocarcinoma of the pancreas is associated with alcohol abuse, smoking, some family cancer syndromes and a history of chronic pancreatitis, although most patients will have none of these risk factors.  Most patients are in an older age group.  Unfortunately, most patients with adenocarcinoma of the pancreas present too advanced to be cured by surgery.  When the tumour is small, and has not spread, then a resection (removal) can usually be performed.  Even after resection only around one in four or five patients will be cured. 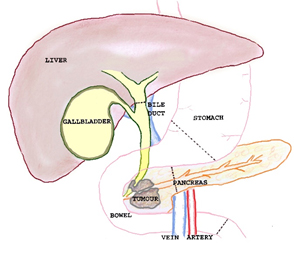 Whipple’procedure: dotted lines represent cut points At a minimum, patients undergoing pancreas surgery will have a CT scan (or sometimes MRI), and blood tests.  If the tumour involves the bile duct, then it is sometimes necessary to have an ERCP (Endoscopic Retrograde Cholangio-Pancreatogram) which is a fibreoptic technique through the mouth like a gastroscopy.  Sometimes a gastroscopy and ultrasound are used to identify a lump or to determine resectability.  It is unusual to require a biopsy prior to surgery.

How is the pancreas resected?

There are two Main operations depending on where the tumour is;

1) Distal Pancreatectomy.  This method means removing the left most portion of the pancreas near the spleen and away from the duodenum.  It is usually a straightforward operation and performed laparoscopically. It is often possible to preserve the spleen, but sometimes not.  Most patients recover quickly from this surgery and are discharged after a few days in hospital.

2) Pancreatico-duodenectomy (Whipple’s Procedure).  This is the most common operation on the pancreas, since most curable pancreas cancers arise in the head of the pancreas near the duodenum and the bile duct.  It is a more complicated operation involving removal of the duodenum, the head of the pancreas, the lower bile duct, and part of the stomach.  It is now possible for many patients to have the surgery laparoscopically.  Following the resection: the bile duct, the stomach and the pancreatic duct all need to be re-joined to the gastro-intestinal system.

After the surgery there is a tube in the nose for a day or so. The drains stay around 4 days.

The post operative course is different for each person and differs between distal pancreatectomy and the Whipple’s procedure.

Most patients are admitted to the High Dependency Unit for the first post operative night.

Patients can expect 6-12 weeks away from work.

What are the potential complications?

The risks of different complications vary between patients.  The risks are higher if the patient is older or has significant other illnesses. Most patients have a straightforward course, but some will have serious complications.  Only complications of Whipple’s procedure are discussed below, as this is the larger of the operations.

Potential complications of Whipple’s Procedure include (but not limited to);

Will I need chemotherapy afterwards?

That will be determined by a medical oncologist (cancer specialist).  Chemotherapy is often recommended.

Will I need radiotherapy afterwards?

Not usually, however, it will be recommended if the tumour is close to the resection margins.

Yes, once the stomach has settled down you should eat normally.  Many patients will require supplements of enzymes as pills with food.

What are the chances of cure?

This depends on several factors and can often only be truly estimated after the resection and pathology examination of the tumour.

Will I need further check ups into the future?

Yes, it is generally advisable to have regular blood tests and scans for many years after surgery so that, if tumour is to recur, it can be diagnosed early