Liver Cancer is classified into Primaries and Secondaries.

Primary Liver cancer is where the cancer arises from the cells within the liver. There are two main types, and a few other very rare types.

HCC is most commonly (90%) associated with chronic liver disease. Cirrhosis of the liver is usually present by the time a cancer grows. In these circumstances the cancer has grown as a result of repeated inflammation and repair within the liver.

The other 10% of HCC grow spontaneously or as a result of transformation from an adenoma (a benign growth). Some of these are called fibro-lamellar HCC because of their appearance.

HCC tends to start off growing quite slowly and as it gets bigger it gets more aggressive and can spread.

HCC is most commonly diagnosed in this country by a screening test performed on someone with cirrhosis. Often this will be a blood test (alpha-feto-protein) which becomes elevated in around 60% of patients with HCC. Other tests to detect HCC are Ultrasound and CT scans of the liver.

Once a tumour is identified, further tests are performed to determine the best treatment option. These tests may include CT scans, MRI scan, angiograms, portal venous wedge pressures, and biopsy of the non-cancerous liver (to check for cirrhosis).

Biopsy of the liver tumour is rarely required and may cause bleeding or spread of the cancer. Biopsy of the tumour should only be performed if the cancer is felt to be incurable by either liver resection or transplant.

Cholangiocarcinoma is the other main liver cancer primary and is a tumour of the bile ducts cells. It can occur near the main ducts just beyond the liver or deep in the liver itself.

Patients suffering with chronic inflammatory conditions of the bile ducts such as the rare disorder of Primary Schlerosing Cholangitis, are at a higher risk of developing cholangiocarcinoma. Oftentimes, however, there is no clear predisposing factor evident, although, like nearly all cancers, advancing age is often present.

Cholangiocarcinoma may present as either a lump seen on CT scan or because it has caused blockage of the bile duct leading to jaundice (yellow colouring). Weight loss, poor appetite and nausea may be present. Investigations to confirm the diagnosis include CT scans, Ultrasound, MRI scans, Endoscopic Retrograde Cholangio-Pancreatography (ERCP), and blood tests.

A needle biopsy is not usually required and may cause spread of the tumour.

The most common treatable liver secondaries are from the rectum or colon (the large bowel). The blood from the bowel runs via the mesenteric and portal veins into the liver, so it is no surprise that the liver is a common site of secondaries from bowel cancer. 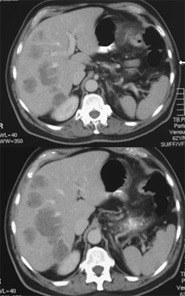 Metastatic Colorectal Cancer in the liver might be present at the time of bowel surgery, or show up months or years later. It might be diagnosed during the original surgery or be found using screening tests following successful bowel surgery. Occasionally the liver secondary is diagnosed before the bowel tumour is apparent. The common screening tests used are a blood test (CEA), and ultrasound or CT scans. Once a liver metastasis has been found it is crucial to work out whether it is alone or there are others. If there are others it is important to know whether they are only in the liver or whether there is cancer elsewhere. To help work this out patients have CT scans, chest x-ray, blood tests and a PET scan.

The PET (Positron Emission Tomography) scan is a nuclear scan that relies on an injection of radioactive sugar. Since cancers rely on sugar for their energy and use it more rapidly than normal tissues, the radioactivity accumulates in the cancers, and shows up as a ‘hot spot’ on the scan. The PET scan can diagnose tumours as small as 1cm. Recent evidence shows that patients who undergo liver surgery for colorectal secondaries, who have otherwise negative PET scans, do very well.

The prognosis (expected outcome) with colorectal cancer metastases varies according to resectability. For patients with removable tumours, the long-term (5 year) survival is around 40%. For those with widespread disease, long-term survival is limited, but chemotherapy when suitable is likely to prolong life.

Patients with metastatic colorectal cancer are best looked after with a multi-disciplinary team approach that includes specialist surgeons, oncologists and nurses.

Many other tumours spread to the liver. Liver resection is sometimes appropriate for neuroendocrine, renal, melanoma and some sarcomas. Resection for other secondaries is not usually indicated.