Laparoscopic Cholecystectomy (Removal of the Gallbladder) 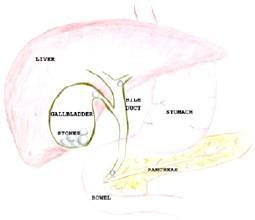 The Liver makes bile and excretes it into a long tube (the bile duct) that joins the first part of the bowel. Bile is a salty solution that helps to make fats that we eat dissolve in water (so that we can absorb them). When there is no fat in the gut, the bile is stored in the gallbladder. When we eat fat, a chemical messenger makes the gallbladder contract, squeezing bile into the gut. Around 1 in 10 adults have gallstones. These begin as small crystals in the gallbladder and grow over time. These stones can cause irritation to the gallbladder, particularly when fat is consumed, causing pain and nausea (biliary colic).

We are unsure why certain people get stones and others don’t. Some factors that have been found to be associated with gallstones are:

Biliary colic is the most common symptom of gallstones. It is pain or discomfort, in the upper abdomen, usually bought on by food (especially rich food). It lasts for minutes to hours, until the gallbladder relaxes. It may occur most times you eat, or sometimes there are months between attacks. Most patients who develop more severe complications of gallstones have had previous bouts of biliary colic. Patients with gallstones and biliary colic are advised to have a cholecystectomy (removal of the gallbladder) prior to the development of severe complications.

Acute cholecystits is a severe infection of the gallbladder. It begins like biliary colic, but fails to improve, and is associated with fever. Acute cholecystitis will usually settle with antibiotics in hospital. If it does not settle then urgent surgery is required. When it does settle, the surgery can usually be safely deferred until the inflammation has all gone (around 6 weeks), making the surgery easier and safer.

If stones escape from the gallbladder into the bile duct, they may cause partial or complete blockage of the bile duct. This will lead to abnormalities of the liver function blood tests. When severe, jaundice with dark urine and a fever indicate an infection of the bile duct (cholangitis). This condition is managed either before or at the time of gallbladder removal, by removing the stones from the bile duct.

This is an inflammation of the pancreas which is a digestive organ at the back of the abdomen. Small gallstones that have escaped from the gallbladder into the bile duct can pass past the pancreas and cause it to become inflamed. Pancreatitis can range from a minor pain through to a severe life threatening illness. The gallbladder is usually removed as soon as possible after a bout of pancreatitis, so that there is little chance of a further attack.

Gallbladder cancer is a rare condition that usually affects older people with a long history of biliary colic. Gallstones predispose to the cancer, but fear of cancer in itself is not an indication for surgery because it is so rare. Gallbladder cancer may be discovered incidentally during the removal of a symptomatic gallbladder, and is usually cured in these circumstances. More advanced cancers may require much bigger surgery, or even be incurable.

Who needs a cholecystectomy?

Most patients have gallstones diagnosed by ultrasound. An ultrasound scan is a simple and quick and accurate test. An ultrasound can occasionally miss stones but this is rare. The ultrasound will also show the width of the bile duct, which will help to determine the risk of stones outside the gallbladder. The ultrasound will also show the liver and other organs to a lesser extent. Patients with gallstones will have some routine blood tests including liver function tests. The liver function tests also help to determine if there are stones in the bile duct.

How is the gallbladder removed?

The most common method of removal of the gallbladder is with laparoscopic (keyhole) surgery. A small cut is made under the umbilicus (belly button). Through this a camera is placed, and gas is instilled. 3 other small cuts are placed in the upper abdomen, through which instruments are introduced to dissect free the gallbladder. If there is concern about the possibility of stones in the bile duct, an x-ray (cholangiogram) will be performed through the gallbladder (cystic) duct. The cystic duct and cystic artery are then clipped with permanent titanium clips. These do not cause any long term problems. The gallbladder is then removed from its attachment to the liver. A drain (plastic tube) is sometimes left overnight to ensure that no fluid (blood or bile) collects in the abdomen.

The postoperative course is different for each person. Most patients stay one night in hospital. If there is a drain it will generally be removed the morning after surgery, just prior to discharge.

Sutures are dissolving and buried, dressings can stay on for 7 days.

A follow-up appointment is made for 3 weeks after surgery. You may eat and drink normally after a day or two, although very rich foods are not recommended in the first week.

What are the potential complications?

Complications of gallbladder surgery include (but not limited to);

Yes, most patients will tolerate a normal diet afterwards, and there are no restrictions.

Can’t you just remove the stones?

No, removing the stones would be more dangerous than removing the whole gallbladder and methods to dissolve them or blast them make the serious complications more likely.

Don’t I need my gallbladder?

No, the gallbladder is largely redundant, and the bile ducts will store all the bile necessary for healthy function.

Laparoscopic Cholecystectomy (Removal of the Gallbladder)